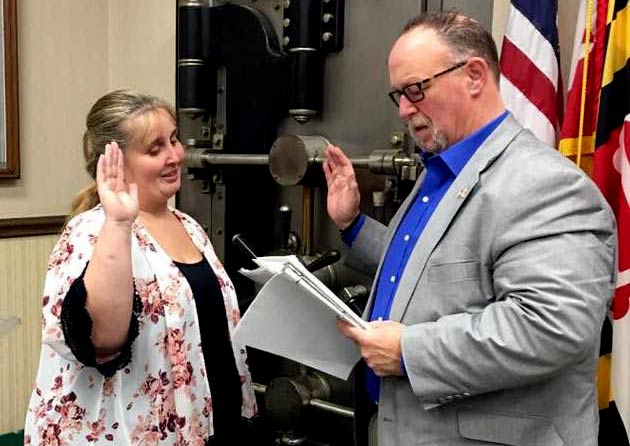 The fourth seat on the council had been vacant for more than a year after Councilwoman Roberta Dopp was forced to resign her seat in August 2015 after moving to a home just outside of town limits.

Jennie Brockell, who has been a member of the town’s appointed election board for four years, was sworn into office during the town’s Dec. 12 meeting. The longtime member of the Cecilton and Chesapeake City fire companies’ emergency medical technician teams said she sees serving on the council to be an extension of her public service.

“Being a member of the fire company and a mom, you want to do what’s best for the town so that it continues to grow,” she said. “I know a lot of the people who live here because I grew up with many of them. Both the Chesapeake City and Cecilton areas feed into Bo Manor High School.”

Born and raised in Chesapeake City, Brockell moved to Cecilton about nine years ago and has seen the town change from the opening of the Parklands at Cecilton complex and the town’s efforts to extend water service to Pearce Creek residents in Earleville. She said she hopes to serve as a liaison of sorts between the fire company and the town.

“I hope to get involved in the issues and make a better community for my kids,” said Brockell, who has two children ages 20 and 17.

While it’s not uncommon for there to be vacant seats on municipal boards, especially in the county’s smaller towns like Cecilton, it was unusual to see a seat go unfilled for so long. Cecilton Mayor Joe Zang has worked throughout that time to fill the position, which will now be up for election in May just months after Brockell filled it. She said she will definitely file for re-election.

Zang has sympathized with the fact that public service is not always an extra duty that many in a community are willing to add to their lives, but also noted that the community should be well represented by its government.

“I think anytime someone wants to step up like that it means a lot to me and council,” Zang said this week. “We understand the issues of trying to take care of a family while holding a job down and trying to add in public service to that isn’t easy. It means a lot for someone of Jennie’s caliber to step up and join council.”

Zang said he thought Brockell would be a strong addition to a council that also includes Michael Cooper, Craig DeVary and Danielle Zack.

“She’s got a lot of great ideas and wants to learn more about local government, so we’re very excited to bring her onboard,” he added.

The town council meets every second and fourth Monday at 7 p.m.