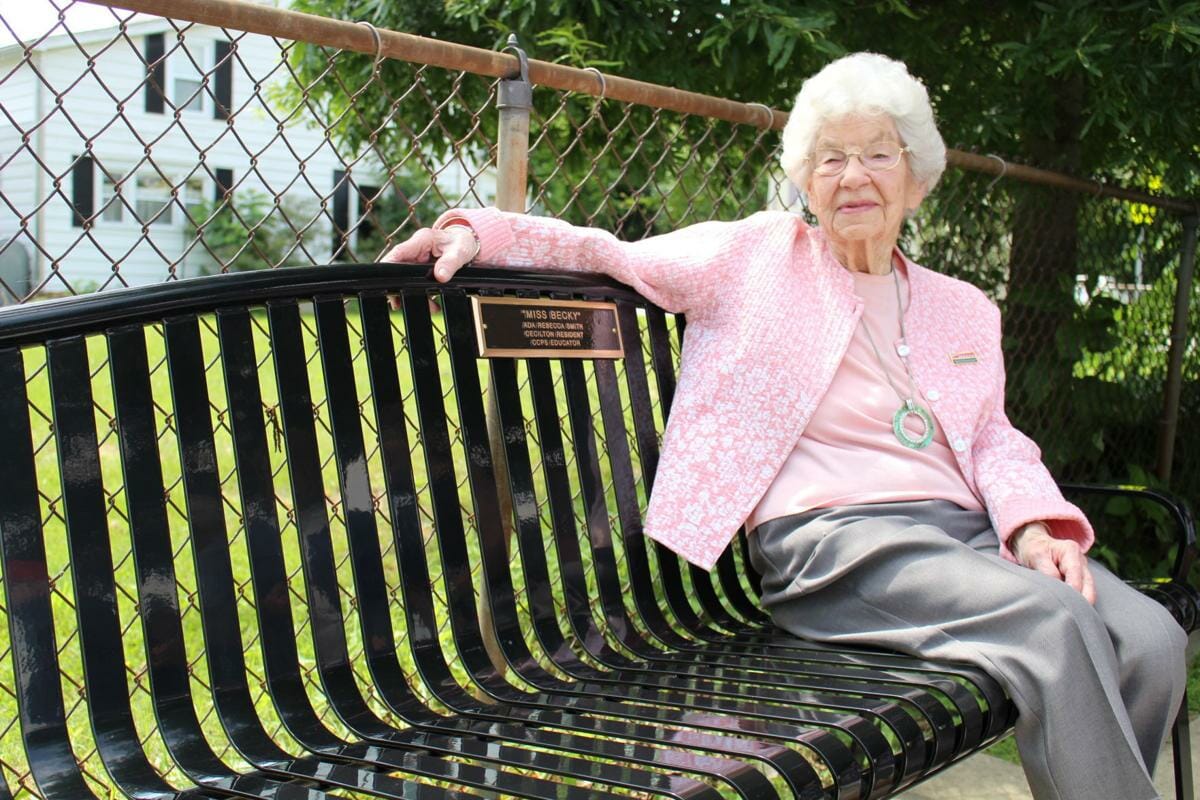 In kicking off a new campaign to encourage locals to congregate more around town, officials couldn’t have been more happy to see the scene at Cecilton Elementary School on Thursday morning.

There elected officials, Cecil County Public Schools leaders, town service organization representatives, local residents and more gathered to celebrate the dedication of a public bench to Rebecca Smith, who at 103 years old has spent the vast majority of her life in Cecilton.

Smith spent 31 years teaching history in CCPS and 10 more years serving as a guidance counselor. After retiring, she was elected to judge of the county orphans’ court, where she served 24 years.

“Ms. Becky had a very positive impact on her students, with many of them staying in contact with her today. I think that’s incredible,” said Mayor Joe Zang, surrounded by many of her former students. “There can be no other person than Ms. Becky Smith for Cecilton to choose to be the recipient of our very first Sit and Stay bench.”

The Sit and Stay campaign, developed by Town Administrator Mary Cooper along with town staff, will place at least five public benches around the small town as intended gathering places. Smith’s bench was placed on the eastern edge of Cecilton Elementary School in honor of her contributions to education.

Cecilton Elementary Principal Meghan Pugh said the school was honored to be the site for the first bench.

“After they shared Ms. Becky Smith’s history with me and how she dedicated her life to the service of children, we couldn’t think of a better place than right on the corner of the school to have this bench,” she said.

Cooper said that as her staff talked about starting the Sit and Stay campaign an anonymous donor offered to fund the purchase and installation of the first bench. Future benches will also be donated by groups or individuals, with the next planned near the Cecilton Zion Cemetery in honor of U.S. Army Cpl. Brandon Craig, an Earleville native who was killed in Iraq in 2007, and all veterans buried there.

On Thursday, Smith said she felt “honored that you have remembered me in this way.”

Smith said she “had a passion to be a teacher” because some of her elementary and high school teachers inspired her. She graduated college at age 20 and immediately got a job at Perryville High School, where she taught five classes a day, coached and ran a home room. In 1943, she moved to Elkton High School where she stayed for 33 years.

“I wanted my students to know the Constitution,” she said. “My interest was to see that my students were contributing citizens. When I look back and think about all of the walks of life which they have taken and how successful some of them became, and yet they remain a part of my life — you’ll never know how much I appreciate the fact that many of them still come to see me.”

Smith’s “baby brother” Daniel Bennett “D.B.” Smith Sr., who is 96 himself, thanked his sister’s former students and the Cecil County community at-large for keeping such close watch of his older sibling through the years.

“I’ve called her often asking to come down only for her to tell me that she already has plans to have lunch with a group,” said Bennett, a World War II veteran who lives in Aberdeen, drawing laughs from the crowd. “That folks come out, visit with her and help means a lot to me, to her and to her nieces and nephews.”

Smith remarked about how rare it must be for something to be dedicated to a 103-year-old and have the recipient attend in person.

“Not many people have that opportunity,” she said. “I pray, give thanks for every day and I keep moving, otherwise you’ll find yourself sitting in a chair someplace in a nursing home.”

Long known for her independent streak and bevy of friends and supporters, Smith encouraged all to enjoy the town’s Sit and Stay campaign.

“The bench is here now and you all are welcome to come sit on it with me,” she said. “Bring a book, sit here and look at nature, or come take a rest.”