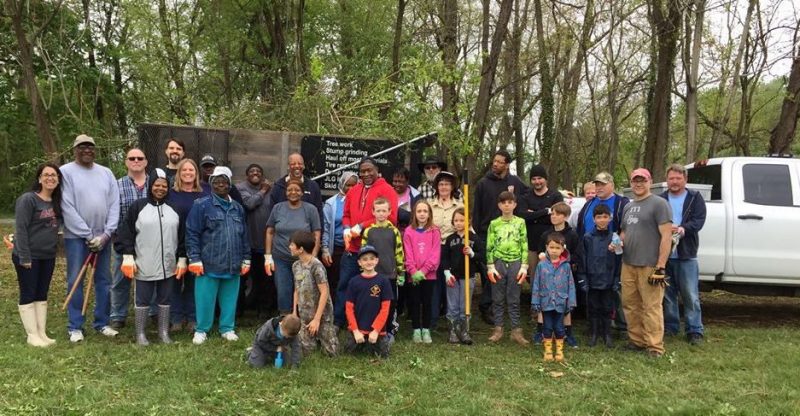 When Mary Cooper was named the town’s new administrator late last year, one of the first things she did was go on a walking tour of her community.

While introducing herself to residents and assessing their needs, she stumbled upon a cemetery nearly hidden from view in overgrowth off Water Street.

“As I started asking around, I found out that it belonged to Union Bethel AME Church and they knew it was there,” Cooper said. “But they explained to me that as an older church with an smaller, aging congregation, they just didn’t physically have the ability to clean it up.”

Union Bethel AME was founded 146 years ago and has been a mainstay for Cecilton’s African-American community. Through time, however, its congregation has fallen to about 20 active members said The Rev. Candice Gray, who joined the congregation in April 2016.

Seeking to come to the church’s aid, the new town administrator began planning a volunteer effort to help restore the cemetery. Over a four-hour period on Earth Day, more than 60 volunteers arrived at the Water Street site to aid in the effort, Cooper said.

“We actually had one family who couldn’t come on Saturday, so they came Friday night and worked for two or three hours, filling an entire trailer full of debris,” she added.

Cooper noted that several companies and organizations also aided in the effort. Delaware City Refinery, the employer of one of the volunteers, donated work gloves, water and trash bags while the Cecil County Landfill donated the use of a debris trailer and the disposal of the brush. Hunter’s Concrete, based in Cecilton, also donated the paid time of two employees to help in the effort while local Cub Scout Pack No. 340 also organized an effort to bring volunteers.

“When we showed up to the cemetery and saw all of the volunteers there, we were just overwhelmed and overjoyed to see the interest of the community to help us out,” the Rev. Gray said.

Armed with chainsaws, rakes and more supplies, the volunteers hacked through the thickets that had overgrown the cemetery and, in the process, rediscovered several graves that had been lost to Mother Nature, including at least two veterans.

“While we knew that there were headstones in there that we could see, we ended up finding more that had been completely lost,” Cooper said. “Among those we discovered a World War II veteran and a Vietnam veteran who had both been completely covered over.”

Cooper, who has long supported veterans-related efforts, said she was saddened to see veterans graves essentially forgotten and not marked with American flags. So she contacted the VFW Chesapeake City Memorial Post No. 7687, which donated new flags to adorn all the veterans graves in the cemetery. On Memorial Day, the VFW post plans to include the Union Bethel AME cemetery in its remembrance ceremonies.

“Our kids went around and replaced all the old flags and put in the new ones,” Cooper said. “It was cool for the kids to learn the process of proper disposal of tattered flags and the respect of placing new ones.”

Cooper said it was heartwarming to see the impact that the community’s involvement was having on the Union Bethel congregation as well.

We had some women out there who are a bit older, but they were working the whole day,” she recalled. “They got emotional when we discovered a couple graves, such as the church organist who died in 1969. They knew who these people were and what families they came from.”

The Rev. Gray agreed that the day dredged up a lot of emotions for the longtime congregation.

“They just felt so good to see those graves again and it generated stories of how these families kept Union Bethel AME going through the years, especially when times got tough,” she said.

Cooper noted that because the scope of the cleanup project was a bit daunting and she didn’t want volunteers to feel overwhelmed, she decided to divide it into three phases. She hopes to hold the second phase at the end of the summer with a third likely next year.

“I left there on cloud nine. It was far more than an Earth Day project,” she said. “I was so overwhelmed with joy.”

She wasn’t the only person to be left with a dramatic impact.

“I think the sight of everyone coming together inspired everyone there to make a commitment to keep this cemetery the way we want it,” said The Rev. Dr. William A. Gray III, Candice’s husband. “It was a beautiful experience, the kind we need more of these days.”