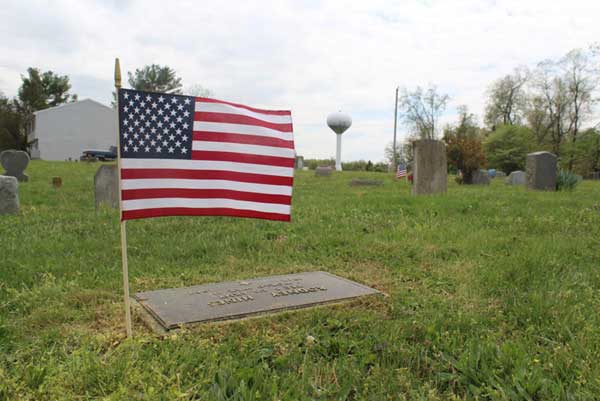 An American flag blows next to the grave of World War II veteran Rodney Hines at Union Bethel AME Church’s cemetery. Hines was one of the many military veterans’ graves that was adorned with a flag Monday during an Earth Day cleanup at the cemetery where community members paid tribute to military veterans who are buried there.

With the American flag waving in the wind overhead, community members gathered Monday morning at the Union Bethel African Methodist Episcopal Church’s cemetery to dedicate a recently installed flagpole and bench to the men and women who served and protected the country.

Chesapeake City VFW Post No. 7687 Commander Wallace Brown thanked those in attendance and reminded everyone of the need to pay tribute to the military members who risked their lives for the safety and security of the nation. 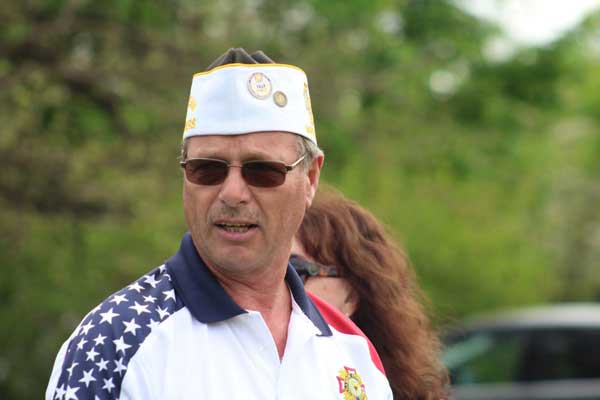 Chesapeake City VFW Post No. 7687 Commander Wallace Brown reminded community members about the need to pay tribute to the military members who gave their lives for the safety and security of the nation. The town of Cecilton dedicated a bench and flagpole at Union Bethel AME Church to those who served and protected the country Monday during an Earth Day cleanup event at the church’s cemetery.

“The VFW always loves it when the general public gets involved with something honoring veterans,” Brown said. “We come here every Memorial Day. We go to about 11 graveyards … just to honor every year so that we will never forget those men and women that served the country.” 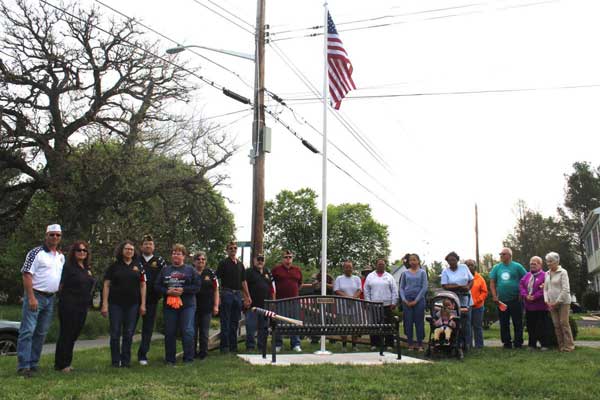 Members of Chesapeake City VFW Post No. 7687, Union Bethel AME Church, and the community at large gather Monday morning in front of a bench and flagpole which were dedicated to those who served and protected the country.

Mary Cooper, town administrator for Cecilton, told the Whig that the new bench is the third in a series that the town is installing to recognize individuals and groups that are important to the town as part of its Sit and Stay campaign.

“We’re a community that’s rich in a history of really good people,” Cooper said. “We love our neighbors here, so I was trying to think of something that would give us an opportunity to recognize the people, events or activities that are special within the Cecilton and surrounding area communities.”

In the past year, the town dedicated benches to Becky Smith, a 104-year-old Cecilton resident who spent over four decades working for Cecil County Public Schools, and David “Bud” Davis Jr., the last living charter member of the Cecilton Lions Club.

Cooper said honoring the veterans who are buried in Union Bethel AME Church’s cemetery was naturally the next group to whom the town wanted to dedicate a bench.

“It was important for us to recognize the veterans that are buried here … We want the flag flying in this cemetery, and we’d like a bench that folks can sit at and reflect and think about their family members and their community members and their neighbors that passed before them,” she said.

According to Cooper, the town plans to dedicate its next bench to Cpl. Brandon Michael Craig, an Earleville resident and soldier who was killed in Iraq in 2007.

After the VFW post’s chaplain, Doug Caleb, led those in attendance in reciting the Lord’s Prayer, the community members got to work on the second part of the day’s events: cleaning up the cemetery grounds. 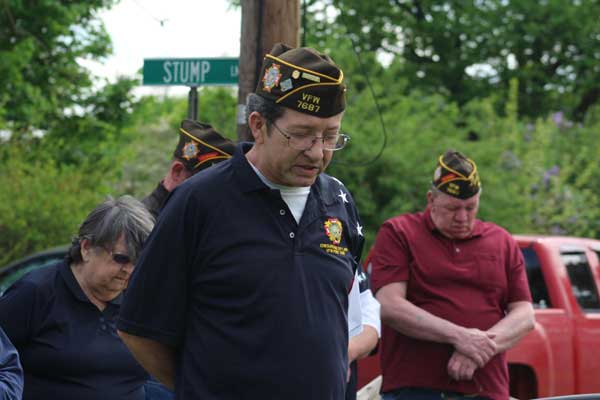 Chesapeake City VFW Post No. 7687 chaplain Doug Caleb leads community members in reciting the Lord’s Prayer during a dedication ceremony for a bench and flagpole at Union Bethel AME Church’s cemetery in memory of those who served and protected the country.

The event, which fell on Earth Day, served as a tribute to the church members and veterans of various wars who are buried in the cemetery, as well as a reflection on the the need to protect and preserve the planet itself.

Cooper saw the Earth Day cleanup as a teaching opportunity for the Cecilton community and especially the town’s young people, including her sons who she brought with her to help out.

“I love our environment,” she said. “I’m raising young people in it. I want to educate them in the preservation of the environment in which they live. I want to preserve the integrity of this community and part of that’s taking care of our environment. To me, Earth Day is really important and it’s just another opportunity to remind people why it’s important to take care of our natural resources. Every day should be Earth Day.”

Community members picked up trash, cleared overgrown brush, and removed trees and branches that had fallen during a recent storm. 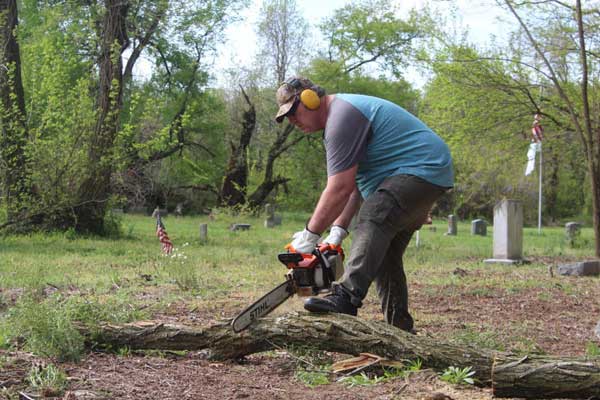 A community member cuts through a fallen branch with a chainsaw during an Earth Day cleanup event Monday at Union Bethel AME Church’s cemetery.

While raking away leaves and brush, Hester Wise came across a familiar name: Linwood O. Wise, one of her husband’s ancestors who served in World War II.

“I didn’t even know it was here,” she said. “It’s just breathtaking … We have discovered so many graves that we haven’t seen in years from way back in the ’50s of people that we just haven’t seen.”

Wise, a member of Union Bethel AME Church, said she was happy to welcome community members to the church’s cemetery to assist with the cleanup efforts.

“It’s such a blessing to have the town come out and just join with us and help us clean up our cemetery,” she said. 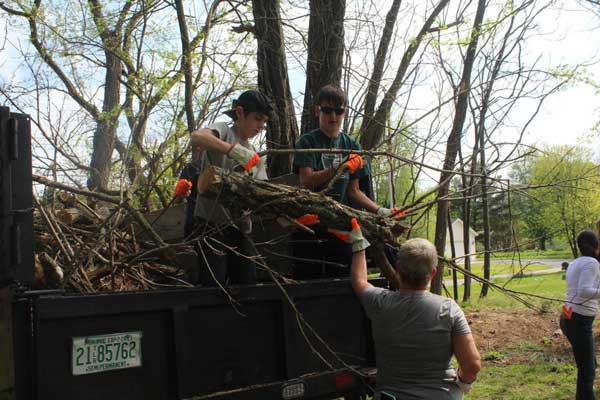 A community member passes a log to two children as they load it into the back of a truck that will take away debris from Union Bethel AME Church’s cemetery.

For Wise, honoring former service members is a tradition that she and her husband make sure they take part in.

Concetta Wright, also a member of the church, said she was pleased to see people help out. She just hopes it can become a more regular occurrence.

“It was very nice helping out,” she said. “I’m glad that they’re doing it, I just hope it keeps up. I hope it’s not an every-other-year event. I hope it’s maybe every six months. That would be wonderful.”

Though the event took place on a school day, Wright also hoped that younger members of the community would participate in cleanups like this.

“I wish it was more younger folks out here to see history in the making and the purpose of keeping a cemetery clean,” she said. “It’s a sacred ground, so keep it clean.” 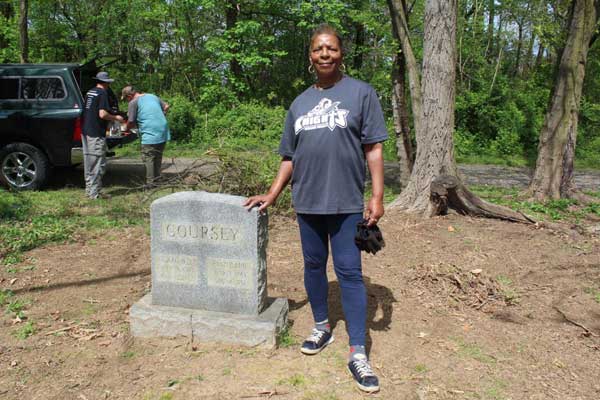 Rocklyn Benson, a member of Union Bethel AME Church, stands next to the grave of her great grandfather and great grandmother, Isaac H.S. and Fanny Ann Coursey, and during an Earth Day cleanup event at the church’s cemetery.

John Kapral, president of the Lower Cecil County Senior Citizens, was also on hand for the cemetery cleanup.

While helping place leaves and vines into a garbage bag, Kapral found a tattered, graveside flag that he planned to give “a proper burial.”

“I’m going to take it to the VFW tonight and place it in the mailbox they have so it can be disposed of properly,” he said, referring to the post’s periodic burning of the flags in reverence.

As the cleanup wound down, town employees Kim Roland and Teresa Quinn walked the cemetery row by row, placing flags in the ground next to the graves of military service members. 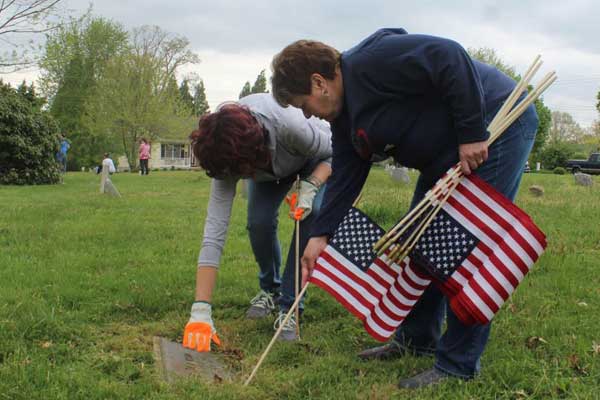 Left to right, Cecilton town employees Teresa Quinn and Kim Roland place a flag next to the grave of a military veteran at Union Bethel AME Church’s cemetery Monday.

Roland, who is a member of the VFW, said honoring veterans and those killed in action is important to her as her father, husband, stepdaughter and father-in-law are veterans.

“This is the second go around that we did and this is almost as satisfying as the first,” she said, noting that this year’s cleanup is the second one the town has taken part in at the cemetery. 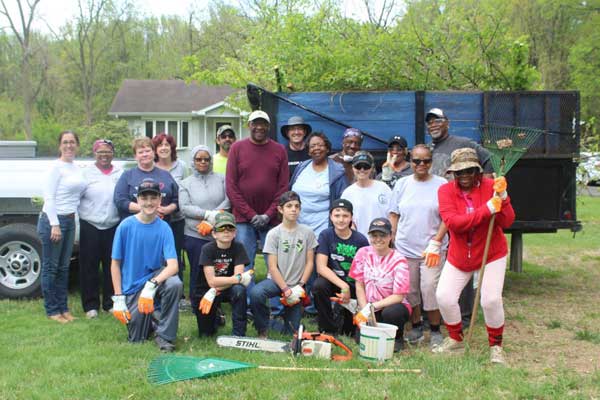 Community members stand together in front of one of the truckloads of overgrown brush and debris they helped clear from Union Bethel AME Church’s cemetery Monday during an Earth Day cleanup event. 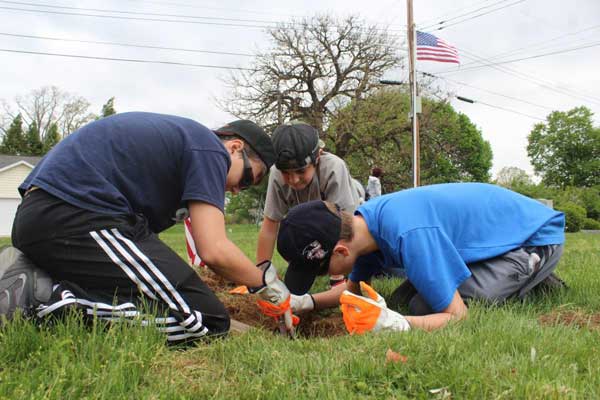 A trio of boys clear dirt off of a grave during an Earth Day cleanup event Monday at Union Bethel AME Church’s cemetery. Community members also paid tribute to the many military veterans who are buried in the cemetery.