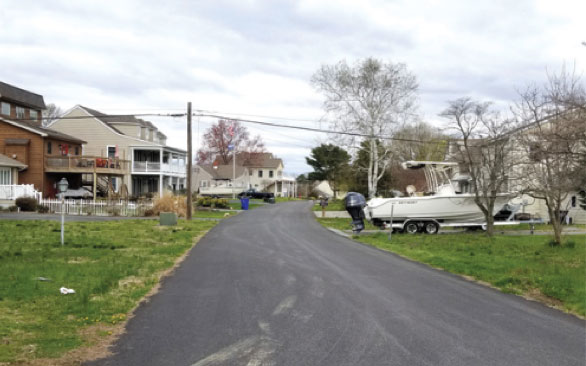 For the past several years, residents near a dredge spoils site at the southern end of Cecil County have been working with federal, state, county and Cecilton officials to bring town water to the Elk River waterfront.

Homeowners near the Pearce Creek dredge spoils area felt the quality of their drinking water had been declining and water tests showed that there were issues with their wells. They claimed the spoils site was the cause of their well problems. Government officials agreed to address their concerns.

The project to bring clean water from Cecilton to the Elk River communities of Bay View Estates, Westview Shores and other nearby houses has cost more than $14 million.

It has involved running a water line seven miles from the town to these waterfront communities and installing the equipment to maintain the water pressure. Another seven miles of pipes has been installed to distribute the water to each home. Roads had to be torn-up to accommodate the installation and roadways have been repaired and/or replaced. Homeowners had to sign agreements and contractors had to customize installations into each house.

“We are in the stage of connections,” said Cecilton administrator Mary Elizabeth Cooper this week. Cecilton water is being provided to 235 homes and, as of an early April report, 194 homes have been connected to the Cecilton water supply.

The nal homes should be connected by late summer, Cooper said.
It has been a long journey to get to this point in the Pearce Creek water project.

The U.S. Army Corps of Engineers operates the Pearce Creek spoils site. It is used to hold material dredged from nearby waterways to maintain the depth for shipping through Maryland waters. The Maryland Port Authority joined in the quest to help the homeowners with the Maryland Department of the Environment and other state agencies also participating in the process. Cecil County government also got involved, as did Cecilton officials.

As the drinking water issue was being studied, officials came up with four possible options to attack the problem. These included: adding more water filters in each home; drilling new wells for each home; drilling one deep well to serve all of the nearby houses; or running a pipeline from the town of Cecilton. The federal, state and county officials presented the Cecilton water proposal as the one favored to resolve the water issue.

For County Executive Dr. Alan McCarthy, the work to help the residents of the Pearce Creek spoils area began when he was still on the County Council.

“You folks will have a good, clean dependable supply of water,” McCarthy told the residents during a meeting with residents a few years ago.

Government officials have set up regular meetings with homeowners to keep them informed of the plans and to answer questions and share ideas.

One of those meetings is set for this Friday in the community hall in Cecilton.

“I think its been terrific,” said Mayor Joe Zang of the project. “The people seem satisfied.”

In 2006, Cecilton was required to upgrade their water and sewer plants.

Zang, who was not the mayor at the time, said it was hoped growth in the town would offset the debt for the new utilities.

With the recession, the anticipated growth did not occur in the town and officials have had to steadily increase utility costs by about two percent each year, the Mayor said.

Within the town limits, there are 298 water accounts. Adding the new customers in the Pearce Creek area means that more people will be paying into the water fund. The Pearce Creek communities not only have the 235 existing homes,

there are still 125 undeveloped lots that will eventually add more customers for Cecilton water.

With the new Pearce Creek customers, Zang said that it is possible that town officials may be able to offer water to all residents in the next fiscal year without any increase in municipal drinking water rates.

“It’s increased our foot traffic into the town hall and the feedback has been phenomenal,” Cooper said. “People say they are happy to have town water.”

“I would hope they are happy we could extend water service to people who really needed it,” Mayor Zang said.