The Rev. Duke Cabin: Can it Survive its Third Century? 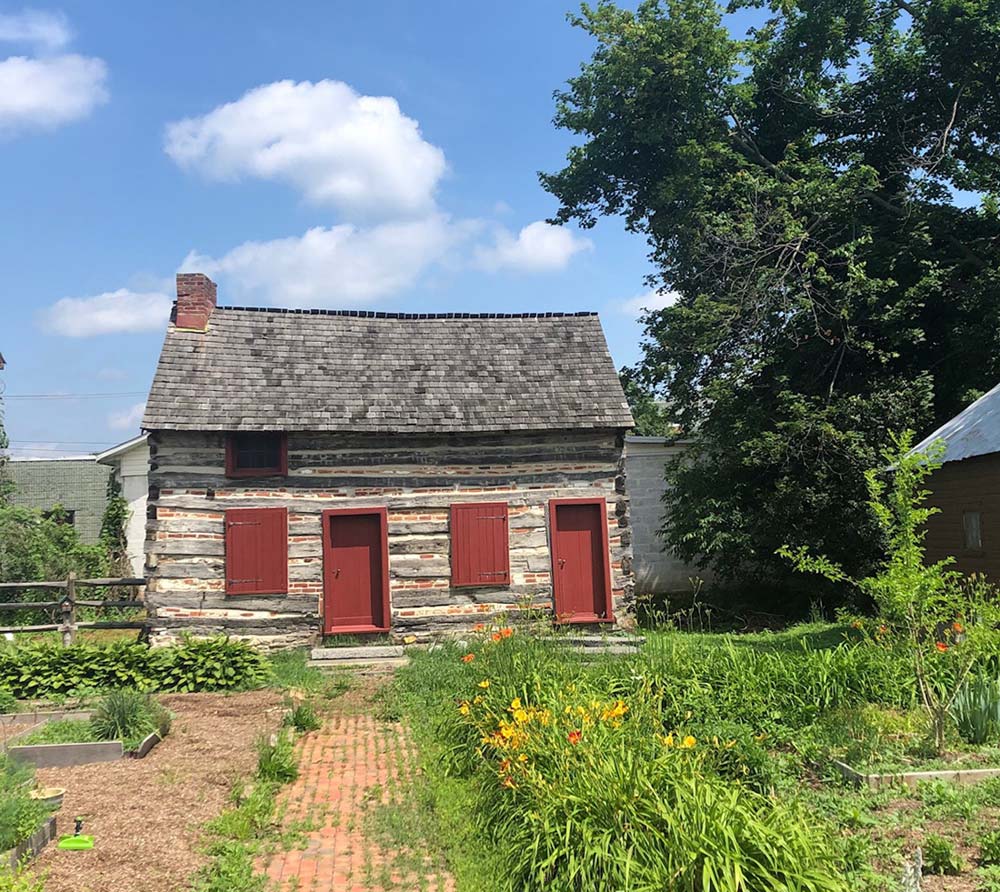 Since 1972, a historic log cabin has resided in the backyard of the Historical Society of Cecil County.  The centuries old structure, with its Cecil County Arts Council garden, is a lovely sight, but it’s in danger of falling down.

The cabin began life on Bow Street in Elkton around 1800 and has served multiple purposes: a residence, a barber shop, a store, and perhaps even a weaver’s shop! But the cabin is historically significant for another reason. It was once the home of The Rev. William Duke, who took title of the cabin and the land upon which it stood in 1820.  He used it for both his residence and his own school.  Rev. Duke was an Episcopal Priest and the school master of at least 4 schools, one of which was the Elkton Academy.  He died on May 31st, 1840 and is buried, along with his wife and daughter, on the north side of the cemetery at St. Mary Anne’s Episcopal Church in North East.

As for Rev. Duke’s cabin, time has taken its toll.  The cabin’s structural defects were first brought to light in December of 2006 by a group of students from Harford Community College. The students conducted a study of the cabin, including its history, its physical condition, and suggestions to both repair and maintain it.  We continued to make necessary repairs and followed recommendations to deter deterioration of the logs, but despite our efforts the elements are winning.

Historical Society Board of Trustees President, Paula Newton says both the old and new problems threaten the structure’s very life.  We have consulted with a timber frame contractor and log house restoration contractor who have pointed out to the Society’s Board the critical issues as follows:

The inward sagging is putting pressure on the corner interlocking logs putting them in danger of giving way.  As in any restoration, we don’t know what other issues may lurk behind interior walls, the flooring, and the roof.  We do know that without substantial repairs, the cabin’s long life may soon come to an end. And those repairs will not come cheaply.  The timber frame contractor estimated that the cost to repair the two hundred year old log cabin will top out at $150,000. The extent of the damage is that severe.

It is the society’s vision that, if restored, the cabin will once again serve as a living history museum with historical interpretation and special events emphasizing the life of the cabin, it’s historic occupant, and Cecil County.  We see Rev. Duke himself, strolling the rooms of his former home, telling the story of his life, that of his family, and the students he taught. The site and sound of school children scrambling through the cabin would once more echo off the walls of the ancient structure as the students size-up the school master’s and student desks, check out where the Dukes cooked meals, slept, and read by the fireplace long ago. These are just a few of the learning opportunities for the next generation of children and adults as we endeavor to pass on this rich history, unique to Cecil County.  But we need your help.

As noted, the cabin’s history is rich and the cost to repair it will be equally rich. Judging from the relatively quick advance of the cabin’s structural issues, we don’t have much time. Please consider making a contribution to repair, restore, and preserve this marvelous piece of Cecil County history. You may become a part of this worthy endeavor by contacting us through our web site at www.cecilhistory.org or call us at 410-398-1790.  Thank you.